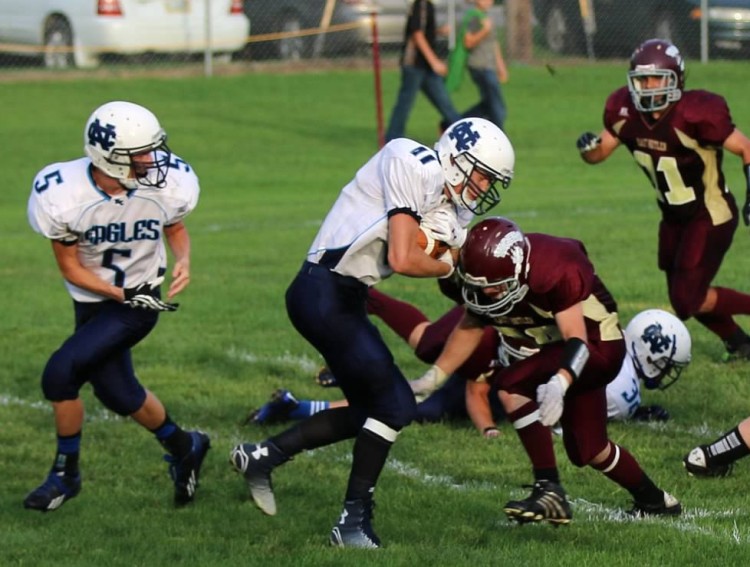 The Nebraska Christian Eagle football team took the long journey to Dwight, Nebraska, on August 29th, to take on the East Butler Tigers in the first game of the season. They came home with a 28-22 win.

Starting the scoring off for the Eagles was Benny Stevens, who blocked a punt in the Tiger end zone. The ball was pushed out of the back of the end zone, which resulted in a safety, putting up two points for the Eagles. During the third quarter, Zach Brock, being quick on his toes, jumped on a Tiger fumble in their own end zone, which lifted the Eagles score from 2 to 8 still leaving the Tigers with a “goose egg” on the scoreboard. Later in the third quarter, Keagan Jewell made a great four yard run into the end zone, which extended the Eagles’ lead to 14-0 over the East Butler Tigers. With the third quarter over and the fourth quarter on its way, a beautiful pass between Logan Faeh and Jewell was made, which put the Eagles ahead of the Tigers with a score of 20-0. As the Tigers head coach rallied his players, six points were put on the Tiger’s side when a pass between Skyler Ratkovec and Colin Wade connected and was run 32 yards into the Eagle end zone. With the score now 20-6, the Tigers again pounced on the Eagles with a 40 yard run by Logan Wade for 6 points. The try for the 2 point conversion was good with a pass between Ratkovec and C. Wade, making the score 20-14 in favor of the Eagles. Answering back for the Eagles was Carson Huenefeld with a 35 yard run for a touchdown. The 2 point conversion try was made good by Trevor Swanson, who snuck into the end zone, making the score 28-14 Eagles. The final score was made by the Tigers’ own Ratkovec with a 29 yard run. The 2 point conversion was made by a pass from Ratkovec to C. Wade, making the final score of the game 28-22.

The Eagles will next be in action at their home opener on Friday, September 12, when they take on the Heartland Huskies.