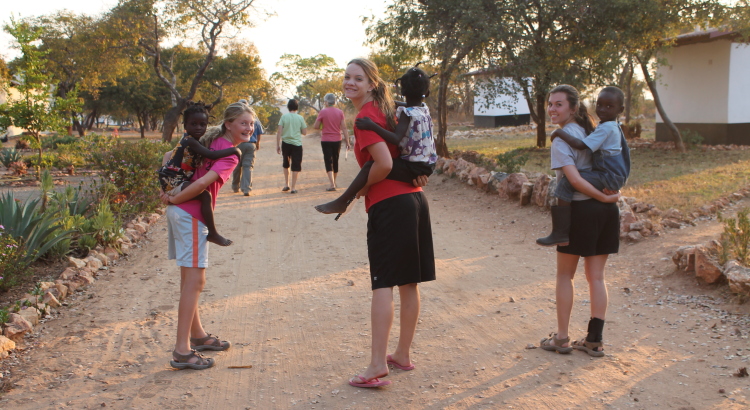 The group went to Kazemba, Zambia, which is two hours southwest of Lusaka, the nation’s capital. Mike and Deb Husman, Scott and Marsha Johnson, and Josh Merchant (’98) were some of the leaders from Heartland E-Free. For the first week of the trip, each morning the team would walk to a local village school, which was two miles from the International Bible College that they stayed at during the trip. At the village school, they volunteered for a Vacation Bible School and touched the lives of many children and teens who attended the school. Although the people of the village school spoke Nyanga, the group was still able to minister to them through translators while at VBS. Team member Anna McHargue said, “I think God spoke to all of us on the team in different ways, but we all grew in the Lord. I pray that the VBS stories ministered to the children. During VBS, Deb Husman led a women’s Bible study for the moms. They did crafts and talked about Jesus. One of the moms accepted Jesus during this time.” The Lord spoke to Keegan Francl in a great way. She said, “Overall, I think my heart was ministered to the most, and I became a changed person. The college students also really spoke in my life while I was there.”

In the afternoons of the first week, the group painted classrooms or cabins at the college and sewed. The group also had the chance to interact with college students. One thing people mentioned from the group was the hospitality of the people in that area of Zambia. To the natives of Africa, it is rude not to say hello and ask how the other person is doing. Anna McHargue said, “I’ve found that Africa generally runs at a slower pace, which can be annoying if you are trying to get things done, but this slower pace has shown me that Africans generally make more time for the people and being hospitable…” That can be a culture shock for the average big-city American who is used to just walking past hundreds of people each day, but it is definitely a good thing to experience.

For the second week in Africa, the team spent more time at the International Bible College and with those students. They finished painting and sewing at the college and visited an orphanage in Lusaka called the “House of Moses.” Keegan Francl said, “God taught me contentment and that being happy is definitely a choice. I don’t believe that the kids [at the orphanage] that had physically nothing really had nothing. They had a big smile on their face, thankfulness, contentment, and enthusiasm for life. I don’t think they didn’t have anything, I think they had everything. I went there to help change their lives and they changed mine.”

ShayeLeigh Cooper had something similar to say about the impact the children made on the team members’ lives: “I saw God work in the hearts of the people in our group. We thought we would go and teach others, but it was the other way around. It made us way more thankful, and showed us we have so many reasons to be happy; we should never be unhappy. God taught me to be happy and definitely thankful. Seeing those people and kids with nothing be so happy is now my reason to be happy. Everyone is so joyful about God and the gospel.”

The group learned a very important lesson about contentment: we should be content in all circumstances because of Christ’s sacrifice on the cross for us. As the song “All I have is Christ” says, “Hallelujah, all I have is Christ!” He is all we need.

Before leaving, the group also went to the market place and bartered for souvenirs, and Anna McHargue and her daughter, Jada, helped E-Free church missionary and NC grad Kristi Johnson (’05), clean her house to get ready to move to another place on campus. “I really enjoyed spending that time with Kristi and hearing her heart about what the Lord is doing for her on the mission field,” Anna said.

God is definitely doing a great work in Zambia, Africa, and these team members are grateful that God chose them to join Him in His work. Matthew 28:19-20 says, “Go, therefore, and make disciples of all nations, baptizing them in the name of the Father and the Son and of the Holy Spirit, teaching them to observe everything I have commanded you. And remember, I am with you always, to the end of the age.” Let us not forget the Great Commission that Christ has called us to fulfill!