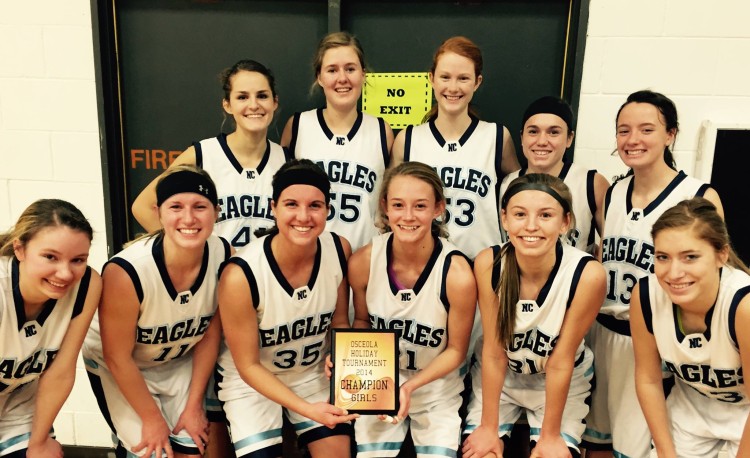 Lady Eagles Celebrate the Holidays with a Big Win

The Lady Eagles traveled to Osceola on Monday and Tuesday, December 29th and 30th, for their holiday tournament. On Monday, the Eagles played Clarkson/Leigh and came out with a win of 38-30. Junior Whitney Heuermann was the high scorer of the game with 19 points, making eight out of ten free throws. On Tuesday, December 30th, the girls’ basketball team went back to Osceola to play the St. Edward Lady Beavers in the championship game. The Lady Eagles won the battle, coming out on top with a 38-25 win. Senior Amber Mazankowski was the high scorer for the game with 11 points, and freshman Claire Ostrand was not too far behind with 10 points, making five out of seven free throws. Mazankowski said, “Though it was bitter cold outside, the holiday tournament was a heat wave! It was a blast, and I loved spending some of my Christmas break with my teammates.”

The Lady Eagles came out as the champions of the Holiday Tournament for the second year in a row. Senior Emily Simmons said, “It was fun to play with my team after the break! Even though we were pretty out of shape, we still wore some pretty awesome Christmas socks!” For being “out of shape,” the Lady Eagles pulled off some good wins.

Currently, the Lady Eagles are 8-3 and will travel to Spalding tonight to take on the Spalding Academy Shamrocks.