The End of an Era

In 2003, kindergartners Alexis Hower, Zac Dockweiler, and Whitney Heuermann entered the Marquette elementary to start a new school year. Mrs. Zaruba greeted the three friends and the rest of their classmates as they filed into the bright classroom. Pictures of frogs covered the walls and an aquarium full of tiny tadpoles bubbled in the front of the room. Alexis, Zac, and Whitney couldn’t wait to start the year with their fun new teacher.

Every day there was a long bus ride in the morning. Going from Central City to Marquette seemed to take forever to the youngsters. When they finally arrived, however, they were greeted by happy teachers and colorful doors. Each classroom had a different color painted on their door, distinguishing the different grades. The kindergartners’ favorite part of the day was when they got to play in the toy room. It was full of miscellaneous toys, dress-up clothes, and tons of fun. Another favorite thing was P.E. Mr. Pedersen was their P.E. teacher, and he always came up with different games to play that the kindergartners’ loved.

Twelve years down the road, Alexis, Zac, and Whitney entered the high school building for their last first day of school. It was a bittersweet day for these three seniors who had been together since kindergarten. Zac said that the first day of his senior year “was a strange feeling. I’ve gone to NC for 12 years, and now I’m finally on the last leg of the journey. Whitney, Alexis, and I have been in the same class since kindergarten, and it’s weird to think of us going separate ways after so many years.”

Not only are the three the only seniors graduating this year who have attended NC since kindergarten, but they are also part of the last class to ever attend elementary on the Marquette campus. In July of 1999, Nebraska Christian Schools purchased the old Marquette school for $50,139.50, and a month later 67 K-6 students began the school year in their new home. Then, four years later, Alexis, Zac, and Whitney started their kindergarten year. This year, however, turned out to be the only year that they would attend school in Marquette. In August of 2004, the elementary school returned to Central City to occupy a facility on the main campus that had been renovated during the summer, and it remains in that building to this day. 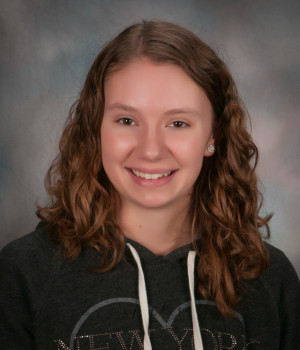 Alexis Hower is a member of the Class of 2016. The daughter of NC alums Jeff ('88) & Daurice (Pizzolato '87) Hower, Alexis has attended NC since kindergarten. She lives in Grand Island.