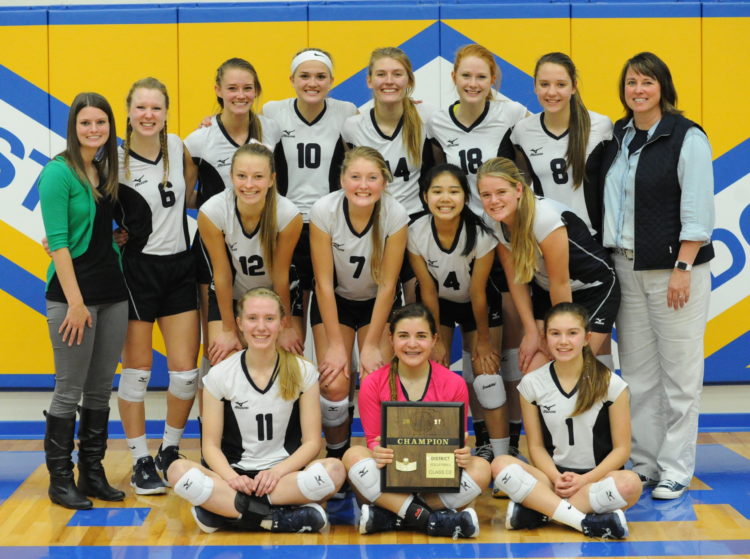 The Lady Eagles Are State Bound!

Update: The Lady Eagles defeated Ponca 3-0 in the first round of the C2 tournament. They lost to eventual state champion Superior 3-0 in the semifinals and lost to Stanton 3-0 in the consolation match to finish in fourth place. Congratulations on an amazing season, Lady Eagles!

On Saturday, November 4, the Nebraska Christian volleyball team did something only one other NC volleyball team had done before: qualify for the state volleyball tournament. The Lady Eagles swept Burwell in an intense 3-set match to win the C2-2 district and make school history as they head into the state tournament undefeated.

In recent years, the Lady Eagles had come close to qualifying for state several times, but they hadn’t been able to get over the hurdle of the district final. From the beginning of the season, this year’s 13-member team has had a different feel to it, and as the team continued to win, people who haven’t followed NC athletics recently took notice. Alumni, parents of former students, and friends of NC followed the team’s success from near and far, rallying around the Lady Eagles.

Head Coach Tonya Ostrand, who is in her eleventh season as the Eagles’ head coach, explained this year’s success, saying, “They are a pretty athletic group of girls! But I think more than that, the entire group, from 1-13, knows their role. They understand their individual importance and work together. They love and care for each other, and they are unselfish.” The public is invited to a pep rally send-off for the team on Thursday, November 9, at 10:45 a.m. The team will play Ponca in the first round of the state tournament on Thursday at 7 p.m. at Lincoln Southwest High School. If the girls win, they will play again on Friday at 3 p.m. at the Pinnacle Bank Arena. (The PBA has a clear bag policy; see more here.) If the team plays Friday, they will also play Saturday–either in the championship (1 p.m. at the Devaney Center) or the consolation (3 p.m. at Lincoln Southeast). Admission to state matches is $7 for adults and $5 for students.

One interesting aspect of the 2017 team is that four of the team members are children of NC alumni who were attending NC when the volleyball team last qualified for state in 1984. Sophomore outside hitter Jada McHargue’s dad Paul (’88) was a freshman in ’84, sophomore defensive specialist Kendyl Jividen’s dad Chad (’90) was a 7th grader, and senior middle hitter Anna Musgrave’s dad Nathan (’92) was a 5th grader. Sophomore defensive specialist Steph Strobel has an even closer connection to the 1984 team: her mom Belinda (Berck ’86) was a setter on that team, which finished with a 13-5 record and fell to Wynot in the first match at state.