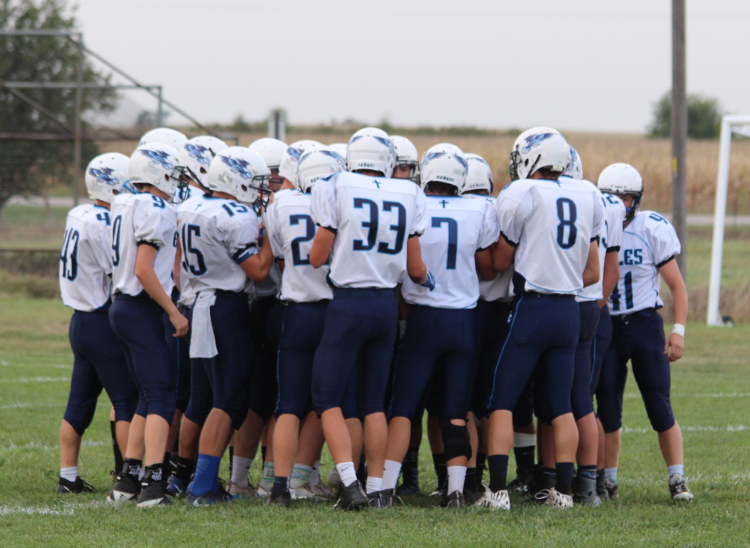 The Nebraska Christian Eagle football team has seen some success over the past four years, but each year has been ineligible for postseason play due to student count. Until recently, the NSAA counted every single student in grades 9-11 in order to classify the football teams. This is completed in a two year cycle. In the past two years, the Eagles’ enrollment was 94, which was above the cut-line for eligibility the 8-man playoffs. To avoid this problem, 8-man teams would need to move up to 11-man, and NC did not have enough players and space to make this happen. NC was not the only team with this problem, as 15 other schools were also above the cut-line.

Fortunately, the NSAA approved using only the number of boys in grades 9-11 for football classification purposes. The cutoff for 8-man eligibility will now be 47 boys in grades 9-11. NC is below this number, which will allow the Eagles to be eligible for playoffs for the next two years. The Eagles will be in Eight Man-1 (Class D-1), which is the same class the Eagles have been competing in, but now they will be eligible for playoffs. Junior Noah Boersen is excited to be able to have a chance to compete in the playoffs his senior year. “I feel that it will give our Senior class, which has varsity experience, a chance to take the Eagle football team one step further. It will give us a goal to work towards and [will provide] motivation in the off-season to get faster and stronger so we can compete in the playoffs.”

Even though Head Coach Carl Ostrand encourages his players to do their best no matter what the circumstances, he knows that a chance at playoffs will add some motivation. “We strive to teach our players to do their best and give maximum effort regardless of circumstance. However, I do believe that being eligible to play football games in the postseason is a motivator for our players. As a coach, it is rewarding to see the work the team put into a season being rewarded by getting to play additional games with a chance to match up with other quality teams across the state. Playoff football is exciting and getting to travel and play different teams in various venues is a special opportunity for our players.”

Look out for the Eagles as they have a chance to play some extra football this upcoming season!