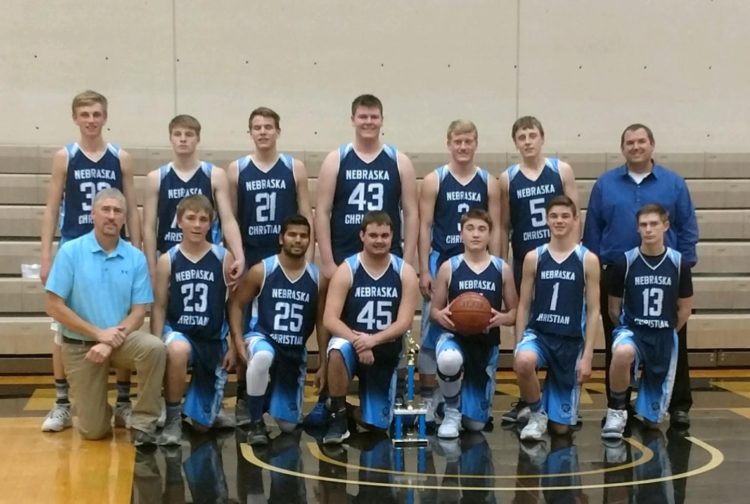 Hoopin’ over the Holidays

The Nebraska Christian basketball teams were quite busy over Christmas as they made their way to Lincoln to participate in the eight-team Nebraska Wesleyan Holiday Tournament on December 28-30. The teams both played Southern High School on the first day and both came away with a win. With the win, both teams secured a spot to play on Saturday, and the worst place the teams could get was 4th.

The next day, both teams had a rematch with Humphrey St. Francis. (The teams both lost to St. Francis in their mid-December matchups.) The Lady Eagles hung with the talented Flyers in the first half, but they fell behind in the second half and lost 65-44 to send the Lady Eagles to the third place game against Louisville.

The boys team, however, was able to pull off a huge upset against 8th-rated Humphrey St. Francis by a score of 45-33. The win sent the Eagles to the championship game and was the highlight of the tournament for the boys.

In the girls’ third place game, a great game was in the making as both teams went back and forth the entire game. Unfortunately for NC, Louisville was able to gain the advantage to take down the Lady Eagles by a single point. The loss gave the Lady Eagles fourth place in the tournament, which is a great accomplishment when playing highly talented, bigger schools.

The Eagles’ confidence was sky high going into the boys’ championship game, but playing another rated opponent in Bruning-Davenport-Shickley was too much for the Eagles as they fell 44-28. Most people would have been surprised if you told them NC would gain second place before the tournament started. The boys had a great three days, and this gave them great confidence going into the rest of the season.

The tournament was a great opportunity for both teams to play bigger schools and experience playing in a bigger gym in front of bigger crowds. This was also a time of great bonding for both teams, as many of the players stayed in the Embassy Suites in Downtown Lincoln.
Boys coach Paul McHargue was pleased with his boys’ effort and saw this as a great opportunity for the kids. “This was a great holiday tournament for our team getting to go to Lincoln. Playing three games in three days was a challenge that we haven’t seen yet as a team. The highlight of the tournament was beating Humphrey St. Francis as it has been many many years since we’ve beaten that team.”

Junior Carsyn Ostrand, a starter on the girls team, said, “The experience was fun, and it was a great opportunity to play some tougher teams and bond with my teammates.”

Both teams will look to continue their successful seasons throughout the rest of season.

Top Photo: The boys basketball team with the runner-up trophy at the Nebraska Wesleyan Holiday Tournament.