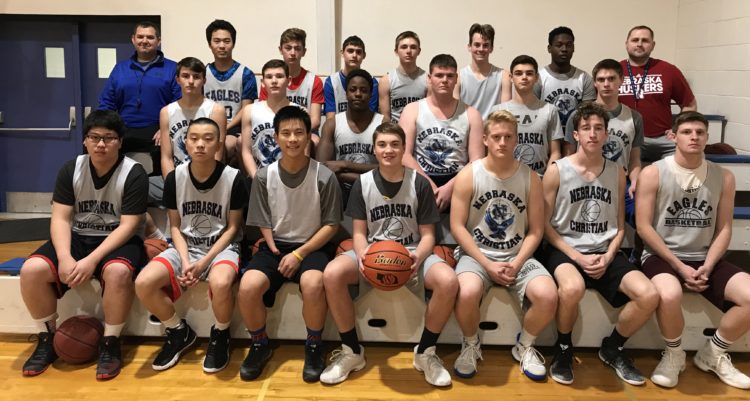 Basketball is underway once again! The Nebraska Christian boys basketball team will look different from past years. The Eagles lost their best player in point guard Ben Griess, who now plays for Hastings College. Griess was the Eagles’ offensive leader and their key defender last year. The Eagles also lost five other seniors, two of whom started.

Another change the team is facing is that of a new coaching staff, though the head coach is a familiar face. Head Coach Andy Perdew was the assistant coach the previous three years, and he is joined by new assistant Drew Schreiber (‘04). Perdew is well respected by the players and has proven to be a great coach. Senior Noah Boersen says, “Coach has made the team his own this year by changing the system up to how he wants it. He does so by stressing the perfection of small fundamental things, and I’m excited to see the result.”

Amidst the loss of several experienced players and the change to a new head coach, the Eagles return two experienced starters in senior Noah Boersen and junior Seth Hower. NC also returns 2017-18 key players seniors Cody Griess and Toby Watson, junior Garrett Nokelby, and sophomore Elijah Boersen. This year also features the return of senior Jon Dockweiler, who last played as a freshman. All of these players will inherit big roles and playing time this year.

The boys basketball team also has some younger players and new players who could see varsity time this year. Sophomore varsity member Aidan Pipher says, “I’m very excited for this season. One of my favorite aspects of basketball is the bond we build as a team, and I look forward to being a part of that again this year.”

The Eagles anticipate a successful and fun season. Their season starts off at home against St. Edward tonight (Nov. 30) at 6:30 pm.

Girls Basketball Preview
Back to the Blog
Wrestling Preview