Posted by Kindra Watson on September 5, 2017

People from all over the world came to the Grand Island area to watch one thing, an eclipse. Nebraska Christian students were no exception, but not all the students were just watching. On the day of the eclipse, groups of two from NC’s science classes could be seen walking around the Christian Resource Center with a notebook in one hand and a thermometer in the other. But why would the science teachers want the temperatures during the eclipse? Did it help the students learn? In a way, yes, but there was more to it than that. They were sending their data to NASA. It was part of a program NASA called Citizen Scientist. But why would NASA care about one school’s temperatures?

As Biology and junior high science teacher Mrs. Tara Mundt said, “It’s the ten versus the thousands; the more data NASA has and the more we give them, the more reliable our information is.”

The more students who took temperatures the better. Every student had a partner and a time slot during the eclipse day. They would take the temperatures once in the sun and another time in the shade. Then they put their information in a chart and later a graph. Once completing that they gave it to Mrs. Mundt, who would send it into NASA.

What did the students think about the project? According to Shelby Swanson, it was a success.  “I think it was cool that we are sending temperatures into NASA,” she said. She, along with other students, learned more about the change in the temperatures during the eclipse as well as how to compile data into a easy-to-read graph. So the data gathering for NASA during the eclipse was helpful for the students of NC, as well as for NASA. 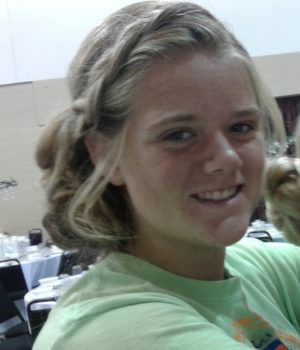 Kindra Watson is a member of the class of 2020. This is the first year she has attended NC. She was homeschooled for five years before coming to NC. Kindra makes her home in Grand Island.