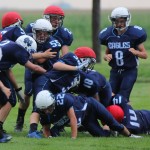 The 2014 Nebraska Christian football team is poised to kick off its season with a mix of new and returning players. Junior tight end Dillon Rose has noticed many improvements so far, especially in the offensive line. “Having some younger people...

Nebraska Christian Schools kicked off Tuesday morning, August 19, with the yearly event that has excited high school kids for generations — school elections. These elections are held to appoint four main officers to represent the student body. These... 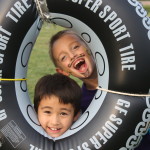 On Friday, August 22, from 5:30-8 p.m., the NC Family is invited to join us for the Sports Drink Football Scrimmage, Popsicle Cross Country Run, Senior Hamburger Feed, and Back-to-School Carnival. The carnival will begin at 5:30 p.m. and includes...

Believe it or not, school is just around the corner! Our annual Open House night will be next Tuesday, August 12. At least one parent from each family must attend this evening. Students do not need to attend (exception: athletes...