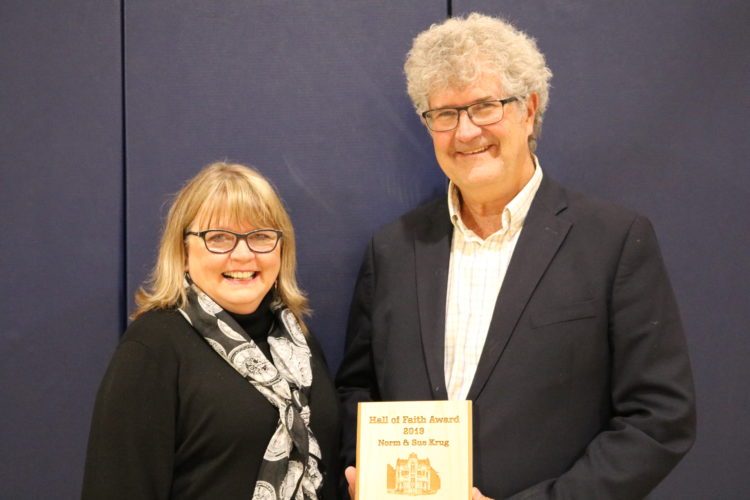 At this year’s Harvest Concert, Tom Dockweiler presented the Hall of Faith Award to Norm and Sue Krug. All four of the Krugs’ children–Andrea Plucker (’99), Nathan (’01), Samuel (’06), and Abigail Ritta (’10)–graduated from Nebraska Christian, and their granddaughters Kaley and Aubrey Krug are currently enrolled in the elementary. Below is the text of Dockweiler’s speech at the Harvest Concert.

I have been asked to present the Hall of Faith Award tonight on behalf of the Nebraska Christian Schools Board of Directors. This award has been presented most years since 1983. One of the goals the board had when they created this award was to honor individuals who have had a long supportive association with Nebraska Christian Schools. The couple we are honoring tonight certainly meets that criteria.

My first awareness of this couple came when a colleague of mine shared his admiration for the behavior of their oldest daughter. John Ellefson found it impressive that this kindergarten child consistently thanked her bus driver each time she got off the bus. In the 32 years since then, this couple’s oldest daughter and her three siblings have all graduated from Nebraska Christian Schools. As a side note, and I don’t know if it’s related or not, the practice of thanking a bus driver when you exit the bus has almost become a tradition around here.

Like most parents of students at Nebraska Christian, this couple was heavily involved in the events and activities that their kids were a part of. More than that, they seemed to really enjoy it. They helped set up and clean up for a lot of events and attended their children’s activities. At one point, she got involved in the speech program as both a coach and a judge. He accepted an invitation to join the advisory council and was later elected to the board, where he served for at least 14 years, with at least six of those as the board chairman.

It has been nine years since their youngest child graduated, and we haven’t seen them around quite as often as we used to. I have a suspicion that is about to change, since they currently have two granddaughters enrolled in the elementary school at Nebraska Christian Schools.

As it says on the plaque I am about to present, they have been used of the Lord in His service as faithful soldiers in spiritual warfare at Nebraska Christian Schools. Please join me in thanking Norm and Sue Krug.