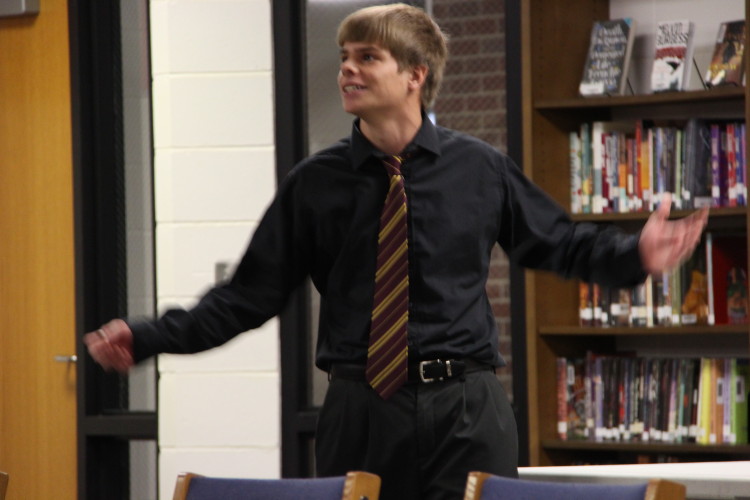 With a total of 21 team members, the Eagles’ speech team is comprised of some new faces and some seasoned veterans. As usual, the Eagles have come out strong with some strong individual showings. When asked about the performances in the early part of the season, Miss Charissa Smith, the speech team’s coach, responded, “We have made an excellent showing at some very large meets of more than 30 schools of all sizes, which include class A, B, C, and D size schools.” The speech team warms up prior to the Ham-Mer meet.

The Eagles had a great year in speech last year, which has led to great expectations for the team this year. Coach Smith said, “There was a large number of seniors that graduated last year who were stand-outs in their events! I was so excited to see how the younger ones have come in this year to step up and fill in events. In terms of that, they need to practice hard, polish their abilities, and also commit their events to the Lord Jesus Christ. They have done well. This year’s seniors are our team spirit, leading the team in individual results.”

Last year, the Eagles’ speech team was both the conference and district champions. Hoping to hang onto the title, Coach Smith has a lot confidence in the team members this year. She said, “Even though we are smaller in number this year, we have been holding our own at some of the very large meets we attend. Our Eagles have made progress to show they are working hard to qualify for State in late March.”

The team travels to Loup City tomorrow and will compete in the Goldenrod Conference meet on Wednesday, February 26. The team will then host its district meet on March 17.

We wish the speech team success this year and nothing but the best for the rest of their season!

Lasso Qualifies for Poetry Out Loud State Final
Back to the Blog
Nebraska Christian Soccer: The Start of Something New