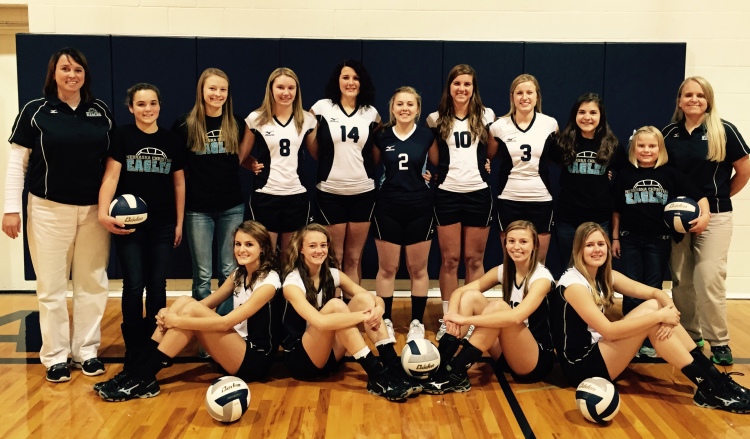 The 2014 Lady Eagle Volleyball team had an outstanding record of 27-5 to finish its season–the best volleyball record in school history. The Lady Eagles advanced through subdistricts and onto district finals with some tough games to get through along the way. Senior Amber Mazankowski said, “The toughest game was definitely [the subdistrict final] against David City Aquinas. God really taught me to rely on my teammates. He showed me that staying positive was something we had to do as a team because, as any volleyball player knows, the game is an emotional rollercoaster.” Beating a team like that is definitely a challenge, and the girls had to work very hard to get to that point, but coming together as a team had its benefits. Whether you win or lose, you’re called to praise God, and the girls surely did that. With an outstanding win against David City Aquinas, the girls moved on to Sutton. Head Coach Tonya Ostrand said, “Sutton was tough because they were diverse and competitive and we played very tight…not very well against them.” The volleyball team ended its season that game against Sutton, losing in four sets.

Regarding the season, sophomore Reagan Williams said, “The sport of volleyball shows me that your ability is not from you; it’s from God. It’s taught me that I need to rely on God for everything and give Him the glory for it.”

Senior Emily Simmons agreed, saying, “I have learned to be a team player and have realized that everything our team accomplished was through the Lord.”

The team accomplished much throughout the season. One accomplishment included beating Burwell in the Goldenrod Conference Tournament championship, as well as being the conference regular season champion. No other NC team had ever won the Goldenrod Conference Tournament before. Coach Tonya Ostrand said that win was one of her most memorable moments of the season, along with beating David City Aquinas in the subdistrict finals.

Freshman Claire Ostrand said, “One of the most memorable moments for me this year was winning against David City Aquinas. I was so thankful for all our fans cheering for us. It was very encouraging.” The NC crowd that night was a great one indeed. Bringing the glory back to God, Coach Tonya Ostrand said, “God teaches us so many things through sports. This year He blessed us immensely throughout the season. We had no injuries and little depth (only nine players on Varsity), but the girls got along and worked hard. We did have a few bumps in the road, but the girls learned to work through adversity and did a better job this year of not falling a part when things didn’t go their way. We still have a lot to work on, but it is getting better. Our theme, especially for the post season was: Trust the Lord, trust your teammates, and trust your training. It was a fun and exciting season. I am proud of the girls and what they were able to accomplish.”

Many of the girls took a lot away from the season in regards to trusting the Lord, their teammates, and their training. It is ultimately all about bringing the glory to God and enjoying Him through it. The volleyball team did a great job this 2014 season in their performance and their attitude as well. As Proverbs 3:5-6 says, “Trust in the Lord with all your heart and lean not on your own understanding. In all your ways acknowledge Him and He will make your paths straight.” Trusting in the Lord, the volleyball team had a steady path to follow this year. Praise God for the amazing 2014 volleyball season!

David Wheaton to Speak at NC
Back to the Blog
Mission: Germany