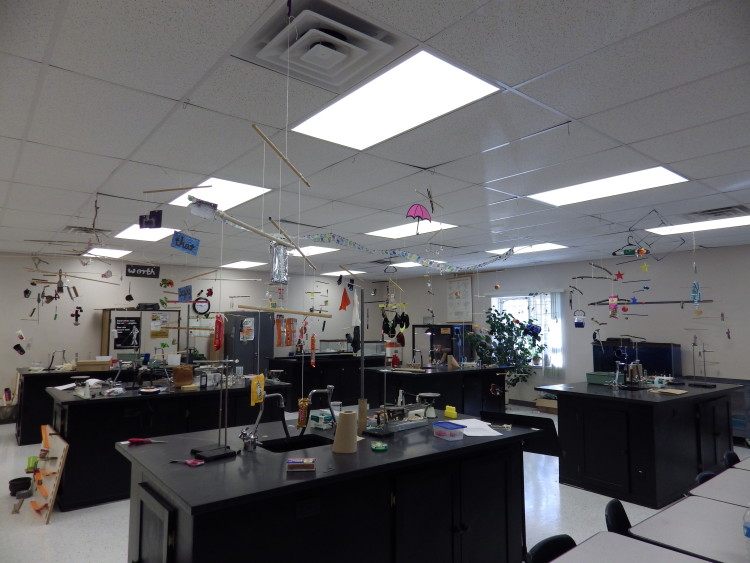 Mrs. Dee Flynn often incorporates hands-on activities into her science curriculum. Some of our student bloggers recently wrote about two of these activities. On February 17th, the Nebraska Christian freshmen showcased their science skills through a project called a Rube Goldberg. A Rube Goldberg is a complicated machine consisting of several components and levers that accomplishes a simple task, such as popping a balloon or watering flowers. This year, 30 freshmen participated in this project. “Overall, the whole project was difficult,” said freshman Danae Burdett. “I did try adding a toy train to my machine, but that didn’t work to well.”

“Personally, I learned a lot more about how different levers work,” added freshman Hunter Butler. Overall, the project was a success and taught the students more about some of the simple mechanics in this world created by our Lord.

You may have noticed this past week that the science classroom was invaded by random hanging objects, but before a liberation mission could be launched, Dee Flynn, the science teacher, informed us that they weren’t aliens bent on the destruction of our science lab; they were actually student projects demonstrating physical properties and the physics students’ mathematical prowess. While still cautious, Mrs. Flynn told me about how the students had to pick a theme for the objects and balance the mobile, all before they put them together using complex math and the laws of physics. Past themes have ranged from camping to superheroes, pretty crazy stuff. Mrs. Flynn likes this batch, calling them “the best we’ve had.” Her favorite mobile was one composed of pictures of superheroes with the teachers’ faces.

Junior Trip to Minnesota
Back to the Blog
True Sports: NC Soccer