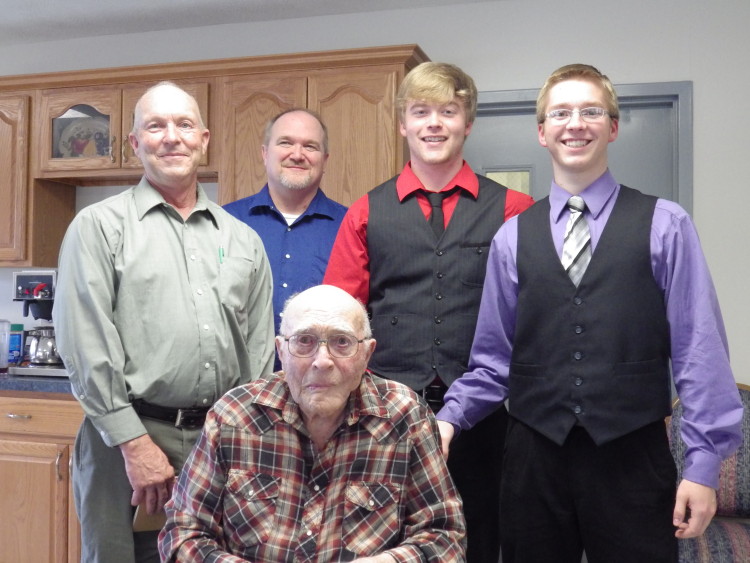 Where Are They Now: Orvil Hamer On Sunday, April 12th, the Nebraska Christian Choir traveled to the Greeley Retirement Home to visit the only living original board member of Nebraska Christian: Orvil Hamer. Orvil was born in 1921 and lives in Greeley as a resident in the retirement home there. The choir sang to the residents, which included Mr. Hamer, and a Nebraska Christian jacket was given to him as a means of thanks to him for his hard work to get the school up and going. He gladly accepted the jacket with tears in his eyes and a smile on his face.

Nebraska Christian Schools began as a dream shared by three men from the Scotia, Nebraska, area: Orvil Hamer, Harry Hermsmeyer, and Joyce Grantham. In March of 1959, Nebraska Christian High School was incorporated with 15 corporation members. After much prayer and research regarding a suitable location for the school, the vacated Nebraska Central College campus near Central City was purchased for a down payment of $1,000 and payments of $3,000 per year for the next three years. In September of 1959, Nebraska Christian Schools opened its doors for 38 high school students taught by 6 teachers. Dorms were opened for both boys and girls that year. A junior high program was added in 1971, and grades kindergarten through 6 began in 1977. Throughout the years, Nebraska Christian has been enriched with the addition of an international program, which led the way to spreading the Gospel across the whole world.

When asked about the school, Hamer said, “It seemed like it took a long time to get the school started, but the Lord worked through us to do His will, and I pray that His will continues to be done.”