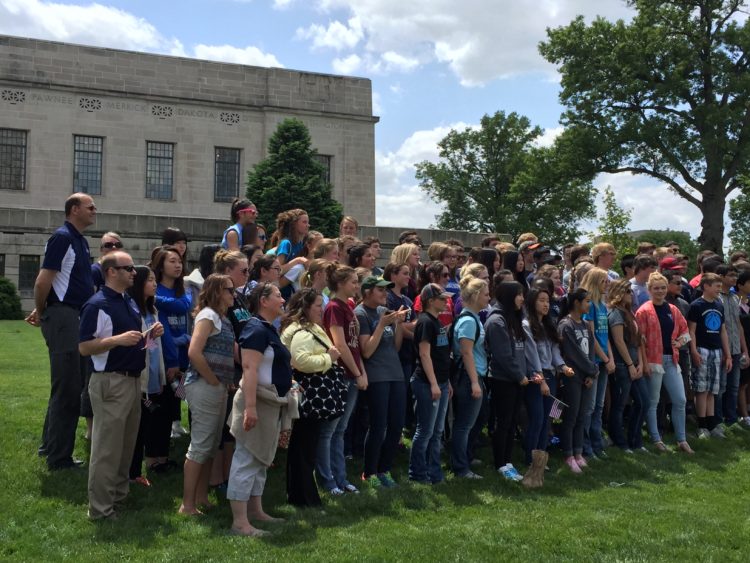 On May 18, the Nebraska Christian high school students traveled to the Nebraska State Capitol for Franklin Graham’s Decision America Tour. Along with a little over three thousand people, the students waited for the rally to begin. At noon, after some worship songs were sung, Franklin Graham walked onto the podium. The next hour was spent in prayer and on topics such as the importance of voting and being involved in your community and its government. The crowd was encouraged to pray daily for the national, state, and local governing authorities. Franklin Graham speaks to the crowd at the Capitol.

This event was a huge eye-opener for the students as they realized the true importance of prayer. Events like this are vital, as well as exciting. The students were challenged to pray for our country, be involved, and vote!

Praying out loud with thousands of other believers was an experience that the students will never forget. The high school students got insight into how important our government leaders are, which motivated many of them to keep them in their prayers and vote!

After the event, the students split up into their e-groups. Because the seniors graduated last week, the juniors were able to take the lead in the e-groups, as the students reflected both on what they learned that day, and on the entire year. Doing this allowed the e-groups to pray together one last time before the end of the school year. It allowed them to pray for each other and to give thanks to the Lord.

Laura, Hailee, and Janie are members of the Nebraska Christian yearbook staff.