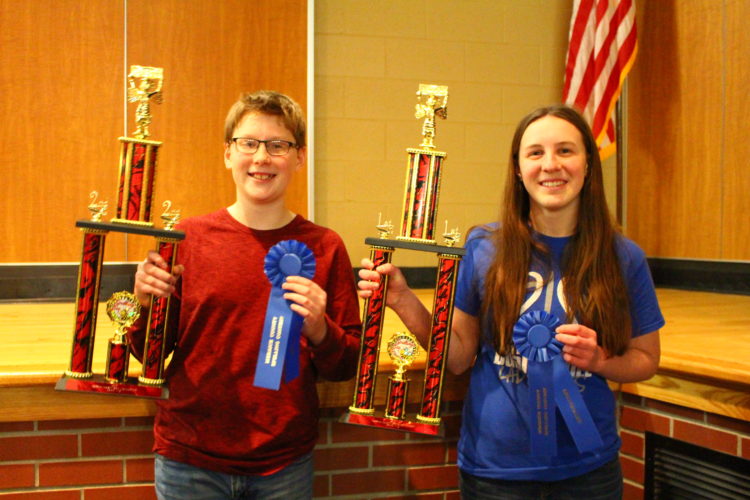 The Spelling Bee. There is nothing quite like it. The intensity and the adrenaline that the students go through is similar to running a 100-yard dash. The pressure is real, and the work they put into it is evident through their incredible results. This year elementary students Drew Perdew (the alternate), Richie Musgrave, Landen Leonard, Kylie Merchant and Rachel Hale were selected to represent the NC elementary. Merchant, Leonard, and Musgrave made it to the oral rounds, and Leonard finished with second place. It sure was a fun day, and it was thrilling to see the students do so well. Daniel Musgrave writes the given words during the written portion of the Spelling Bee.

The Junior High students also saw great success. The qualifiers were Tyler Cumpston, McKenna Leonard, Daniel Musgrave, Olivia Janssen, and alternate Chantz Stuhmer. When asked what some of the highs and lows of the day were, Musgrave responded, “A high was we got to compete with people from all around the county and that was pretty interesting. A low was the pressure.” Musgrave was right—the pressure sure was intimidating, but he did exceptionally well, as did the rest of the students.

All competitors made it to the oral round, and both Janssen and Cumpston remained in the competition until they were the final two. The two students went back and forth between words until finally Janssen became the Spelling Bee champion. Cumpston said, “I was nervous and excited at the same time. When people started getting out, I realized I had a chance! My favorite part was that NC got both 1st and 2nd!” It was a tough competition, but each student excelled greatly, and all were proud of the outcome.

Hailee Broman, a senior this year, is the yearbook's editor and head photographer. She has two siblings, Alyssa (8th) and Conner (7th). She enjoys photography, art, music and anything outdoors. Hailee is involved in the Ensemble choir and the girls' soccer team. She has attended NC since the 6th grade and has loved it ever since.