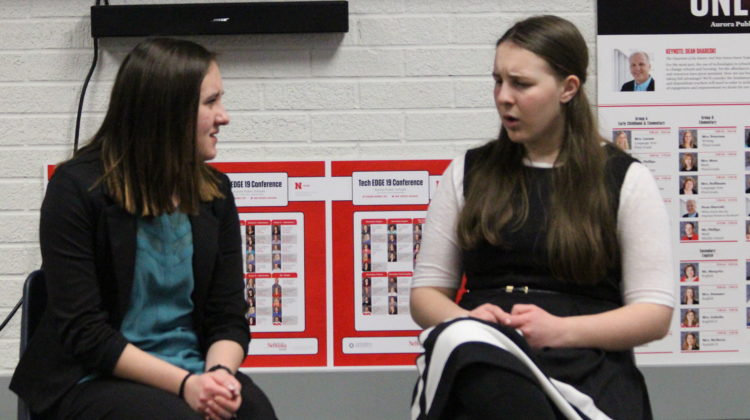 As the members of the speech team reflect on their season thus far, they willingly acknowledge the numerous singularities that built and shaped each individual. At the beginning of the season, the team was comprised of fifteen members, six of whom were novice, or first-year participants. Another unique aspect of the team this year is that it is all-female. One of the novice girls is Sara Royle, a sophomore who had this to say about the season as it has unfolded: “Speech has been a blessing through getting to know all the girls on the team…and it has been good for me in the aspect of learning to work with other girls.” Royle has been active on the team by participating in an OID, and she is an asset to the group with whom she performs.

As the season begins to draw to a close, the tried-and-true varsity members have much to reflect on. Katie Nyberg is a senior, and this is her third and final year in the speech program. “The speech season goes so quickly; I am sad that it is my last,” she states, recognizing the nearing end in March. “It has done so much in building my character, and I wish the season was a bit longer.” Each of the team’s four seniors will greatly miss competing at meets and working hand-in-hand with teammates and coaches. It is an atmosphere unlike any other activity, and the memories made within last a lifetime.

The team has made huge strides this season, collecting medals and superior ratings. Olivia Janssen, a 9th grader and first-year member, recently received the distinction of 1st place for her poetry piece at CNFL 2, one of the largest meets the team attends, held at Grand Island Senior High. Josie Maberry, another novice member, has also received multiple medals for her informative piece–as high as third. The coaches this season have been extremely helpful in pursuing excellence in the activity of speech. Rachel Hicks is the first-year head coach after serving as assistant coach last year. She is aided by two assistant coaches: Ruth Ferris, a long-time speech veteran, and Trina Burdett, mother of Danae Burdett, a senior on the team.

Looking ahead, there are two important meets on the horizon. Conference speech will be hosted by Spalding Academy on February 21st, and the district meet will be Tuesday, March 13th, in Loup City. We eagerly await the final results of the season, and wish our girls luck as they work hard to get there.

Danae Burdett is a senior at Nebraska Christian. She is involved in speech, quiz bowl, student council, and choir. She lives in Grand Island and has been attending NC since 9th grade.

Superintendent’s Report: NC in 2017
Back to the Blog
Meet an Eagle: Grant Stuhmer