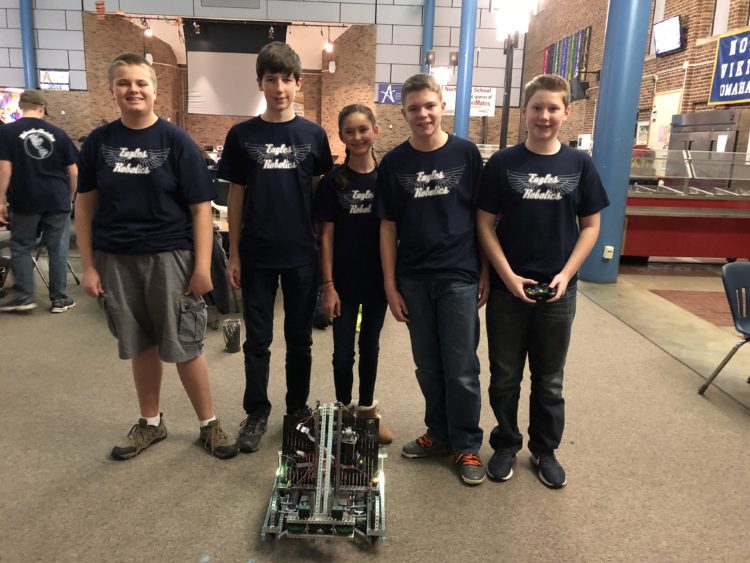 In the first year of robotics at Nebraska Christian, the junior high team has qualified for nationals! The team, comprised of 8th graders Tyler Cumpston, Aidan Feely, and Jonathan Needham and 7th graders Amanda Carlson and Cooper Schnell, will compete at the U.S. Open Robotics Tournament at the Mid-America Center in Council Bluffs, Iowa, on April 5-7.

The team is coached by Gary Needham. He was assisted by Don Smith, Zane Dexter, and Dennis Cumpston at various times throughout the season.

We spoke with Needham to learn more about the team and what they can expect at nationals.

What does a robotics competition entail?

Robot competitions begin with an inspection of all robots. They must first pass a safety and sizing inspection. Next, the robots alternate through skills tests and team interview judging. Judging includes submission of an engineering journal which documents the design and development of the robot throughout the year. During this time, teams often make last minute tweaks in the pits and practice fields. The majority of time is spent in round-robin qualification rounds, where robots participate in 2-on-2 matches to determine the rankings for the day. For the elimination tournament, the top qualifying teams each select two other teams to compete as an alliance.

Awards are given for the tournament champion and runner up, but also the top skills performance, robot design (based on the engineering journal and interview), innovation, and sportsmanship.

Needham: The team attended three regular season tournaments (Omaha North, Omaha Benson, Aurora) and missed a fourth one due to weather. The team also qualified for and attended the Heartland Regional (multi-state) tournament at Cross County based on their regional skills test ranking for the regular season. Skills testing comprises two one-minute opportunities for the robot to score as many points as possible by itself; one by remote control (driver mode), and one where the robot runs a computer program (autonomous mode). 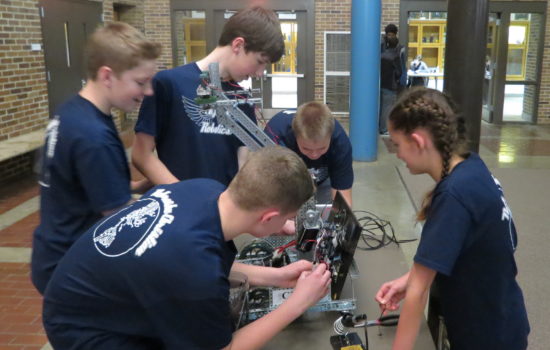 The junior high team makes adjustments to the robot at a competition.

NC’s junior high team has shown consistent improvement throughout the year. In the qualification rounds, they consistently finish in the top half, and once they were part of the championship alliance. Their improvement shows more prominently in the skills rankings. For the first tournament, the robot did not perform consistently enough to complete a skills test. By the Heartland Regional tournament, the robot finished 6th out of 18 teams.

How did the junior high team qualify for nationals?

Needham: Teams qualify for the U.S. Open based on the region’s “China Cup” point standings. Points are earned through the robot’s skills score (top 8), qualification rounds rank (top 10), and by winning certain awards at regular season tournaments. The top teams earn an opportunity for a partially sponsored trip to China. Additional teams earn an invitation to the U.S. Open. Full China Cup information can be found here.

The NC team earned China Cup points by being a tournament champion and placing in the qualifying rounds.

What can the team expect at the U.S. Open?

Needham: The competition includes VEX middle school, VEX high school, and Open divisions. NC competes in the Open division, which allows a wider variety of components. Registration, robot inspections and skills testing are Thursday, qualifying rounds occur all day Friday and Saturday morning, and the elimination tournament is on Saturday afternoon. An agenda can be downloaded here.

Thanks, Gary! We wish you and the team the best at the U.S. Open!