The 2018-2019 school year is underway! Students are coming off summer break, which to some seemed not long enough, and are getting back into their normal school routine. However, some students were involved in the school year throughout the summer. The Student Council (StuCo) had four meetings throughout the summer to be a step ahead and come up with great ideas to add to this school year. President Jon Dockweiler said, “The summer meetings really help kickstart the school year. It was great to realize the potential StuCo has to do really great things and aim for them from the very first day! We had a mission and game plan before our peers even came to school!” 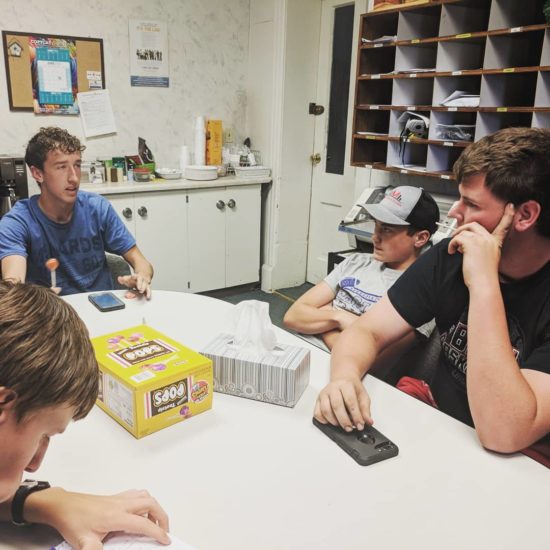 Above: Clockwise from top left: Jon Dockweiler, Cody Griess, Seth Hower, and Ben Janssen make plans for the school year during one of the summer student council meetings.

During those summer meetings, the student council set dates for theme game nights and brainstormed ideas for Homecoming week. The members also planned the first StuCo event, a movie night following the annual carnival and sports scrimmages at the end of the opening week of school. The student council also planned and installed a memo board in the high school, which contains a calendar of activities for that month, as well as student challenges. Through the summer meetings, many other ideas were brought about and put into to action for the upcoming year before it even took off.

The student council is set to make this year an unforgettable one for their fellow students. Junior Class President Seth Hower is very ready for this school year. “I’m really excited to give the younger students in the high school a chance to bring ideas to me, which I can bring to the elder student council members,” he said. “I’m also very excited to lead the junior class in a way that will let them give lots of input into what I bring forward to the elder members.” The student council is full of many ideas for the near future and is full of creative and hard working students.

Top Photo: Students gather for the first StuCo event of the year, an outdoor movie.