Homecoming 2013 featured wacky dress-up days, a hit pep rally, the return of the Class of 1973, and a football win on a cold, blustery night.

Below are some of the highlights:

The student council surprised the student body by decorating the high school building with balloons, posters, and streamers before class began on Tuesday. Tuesday was Famous Pairs Day. We had more student participation on this day than on any other during Homecoming week. For Thursday‘s Occupation Day, each class was assigned a vocation ranging from agriculture to education to medicine. The annual Homecoming Pep Rally – which included a rousing rendition of the school fight song, a girls’ “most intimidating” competition, and an all-school game of scatterball – took place on Friday‘s Blue & White Day. Friday night’s Homecoming football game featured a 40-18 win over East Butler; interviews with members of the Class of 1973; and the presentation of a signed football to NC’s first football coach, Ruben Ruybalid. The evening ended with the introduction of the senior class, as the cold and wind caused the planned “S’mores Fest” to be postponed. For more on our Homecoming festivities, view our Facebook album here and watch the football game here.

Celebrate My Drive–Vote Now!
Back to the Blog
Mark & Angela (Russell ’97) Gustafson 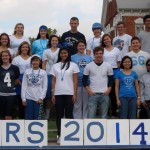 Homecoming 2013 featured wacky dress-up days, a hit pep rally, the return of the Class of 1973, and a football win on a cold,... Read Full Post