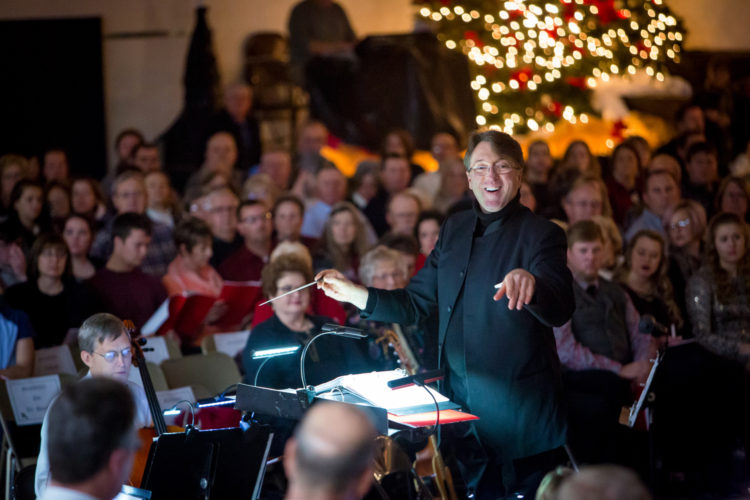 The 11th Annual Festival of Lessons & Carols appeared poised to go off without a hitch. Tickets sold out a few days before the event. The NC choir had spent several class periods working with Maestro Eric Dale Knapp, and the orchestra and small ensemble had put in many hours of practice. On Friday, December 16, students from Nebraska Christian, High Plains, Central City, and area homeschools spent the morning rehearsing choral pieces with Maestro Knapp. After lunch, orchestra members joined the rehearsal in preparation for the evening concert.

By 3:30, everyone had been sent home. An ice storm had moved into the area, making the roads treacherous.

The decision was made to postpone the Festival until Saturday afternoon, pending the weather. Saturday dawned bitterly cold but with no precipitation in sight, so the organizers decided to go on with the show. While not all of the choir and orchestra members were able to return Saturday, about 75% of the orchestra and 70% of the choir participated.

Approximately 450 people braved the cold to experience the Festival, and it was a joyful, worshipful time. Festival Coordinator Jody Heuermann said, “The Festival of Lessons and Carols went extraordinarily well considering the inclement weather we experienced. Those in attendance were moved and touched by the program.” Special Events Assistant Deana Leonard agreed, saying, “I thought things went very well. God provided in little ways to make it a blessing to all those who made the effort to participate in or attend the Festival.” Heuermann added, “The general consensus of those who attended was that they would never miss it. And we look forward to next year, as preparations are already underway.”