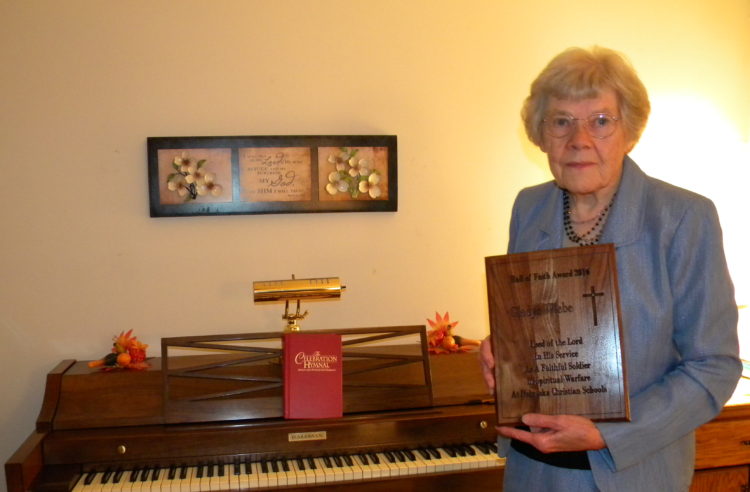 Each year, the NC board chooses one or two couples or individuals to honor with the Hall of Faith Award, given for service at Nebraska Christian. Be it through teaching, giving of time and finances, promoting the school, or being involved in other ways on campus, these individuals have made an impact on Nebraska Christian and its students.

This year, the board selected Gladys Wiebe to receive the honor. Wiebe, who lives in Kansas, was unable to be at the Harvest Festival, where the award is always presented. Board secretary Lester Unruh and his wife, Twyla, visited Wiebe while on a trip and presented her with the plaque.

In the second year of Nebraska Christian’s existence, a young woman from Kansas joined the staff. She was the office secretary, as well as the sponsor for the school newspaper. Her work in the office and around the campus was meticulous, and she expected the same from other staff and students. Her giftedness in many areas was put to good use in her years at NC. A talented musician, she taught piano lessons and accompanied musical groups and individuals on campus. When there was a need for a girls’ dorm mom, she filled that position in Whittier Hall. Other positions she held over the years were secretary to the Superintendent and bookkeeper. She also made sure the campus bookstore was stocked with necessities for the students.

Her involvement in the local Berean Church in the areas of Christian Education and music was much appreciated. One year, unable to find a Christmas program suitable for the children of the church to perform, she and a small committee wrote one themselves!

She left the school to return to Kansas after 15 years, but her faithfulness in praying for and giving to NC over the years has been a blessing. We are honored to present the Hall of Faith Award for 2016 to Gladys Wiebe.