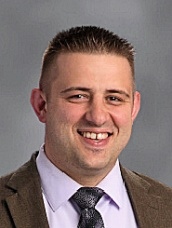 Nebraska Christian Schools is pleased to announce the hiring of Tim Hekrdle as Superintendent for the 2018-19 school year.

Hekrdle graduated with a BA in Business Education from Northwestern College in Iowa. He began his career teaching business at Western Michigan Christian High School in Muskegon, Michigan, before relocating to Nebraska to teach at Barr Middle School in 2008. Throughout his tenure, he has held positions including Instructional Technology Coordinator, Summer School Coordinator, Assistant Principal, and Interim Principal. Among his many accomplishments, he was selected as the Region 4 Assistant Principal of the Year, received his MA in Educational Leadership from Grand Valley State University in August of 2010, and is currently working toward his Education Specialist Degree through Doane University.

“I am blessed to have served at Barr Middle School and the greater Grand Island Public Schools system for the last ten years. Having to say goodbye to this GIPS family was by far the most difficult part of saying yes to serving the Nebraska Christian community,” Hekrdle says.

Hekrdle’s hire follows the departure of Josh Cumpston, who has served as Superintendent for the past seven years and now transitions to lead in the same capacity at Silver Lake Public School.

Chairman of the Board Paul McHargue stated, “We are grateful to Josh for his leadership of the school and his faithfulness to our mission. Throughout this hiring process, God’s hand has been evident as doors have opened leading to Tim’s hiring, and we look forward to seeing how God will continue to use and grow Nebraska Christian under Tim’s leadership in the years to come.”

Hekrdle states that beyond the passion of the educators and the rich, faith-filled tradition that has sustained Nebraska Christian since its founding in 1959, he was also drawn to the position for another reason. “When I wrapped my mind around the idea of leading in the same place where my children could receive both a high quality and a Christ-centered education, it was really a pivotal moment for me. That is a priceless prospect.”

Nebraska Christian Schools is a K-12, non-denominational, private, Christian school whose mission is to assist the family and church by providing a Christ-centered education, equipping students with a Biblical worldview, and encouraging a love relationship with the Lord Jesus Christ. Located in Central City, Nebraska Christian Schools educates more than 200 students each year and offers a wide array of academic and extracurricular programs and opportunities.

“It is incredible to think about joining a community of people that is so obviously impacting students and living out its mission in such relevant ways,” Hekrdle adds. “It is an incredible honor to help the Nebraska Christian community move forward in fulfilling next steps in its legacy.”