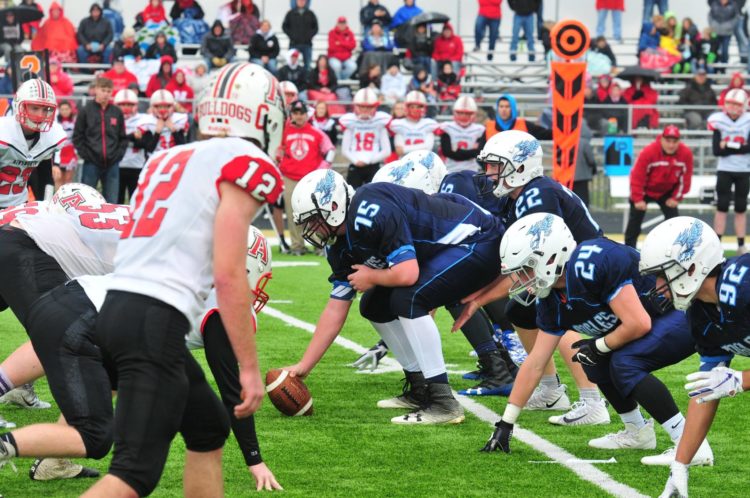 For the first time since 2013, the Nebraska Christian Eagles football team won their way to the state playoffs. (The team spent the last four seasons ineligible due to enrollment numbers.) The team finished the regular season at 8-0, and they ranked number 9 in Class D-1 on Max Preps.

On October 25th, the Eagles played the first round of the playoffs against the 3-5 Ainsworth Bulldogs. The Eagles blew out of the gates strong, scoring a touchdown in two plays on their opening drive. They kept that momentum going, achieving a 3-and-out on their first defensive series.

The Eagles had to overcome many obstacles when sophomore starting quarterback Elijah Boersen left the game with an apparent injury. Senior fullback Toby Watson stepped up into the quarterback role for the first time, running the offense under center. Senior tight end Noah Boersen moved to tailback, while fellow senior running back Jake Twogood moved to fullback. Sophomore tight end Grant Stuhmer stepped up into a big role for his first major offensive varsity football action.

Senior Cody Griess said, “The absence of Elijah was a challenge, but my fellow senior teammates Noah and Toby stepped up big for us, playing new roles.”

The Eagles kept the momentum rolling despite the absence of their starting quarterback and went into the half with a lead of 40-6. The Bulldogs proceeded to make a small comeback in the second half, scoring two touchdowns on kickoff returns, but the Eagles kept the Bulldogs in the kennel and flew away with a first round 76-40 win. Junior guard Garrett Swantek said, “It was a pretty awesome experience to be able to have the opportunity to go out there and play the game of football to the glory of God.”

The Eagles next take on the North Central Knights on Wednesday, Oct. 31, at 4:30 p.m. at Preferred Popcorn Field in Central City. Admission is $7 for adults and $5 for students. KZ-100 (100.3 FM) will be broadcasting the game, and it will be live streamed (audio) at mycentralnebraska.com. 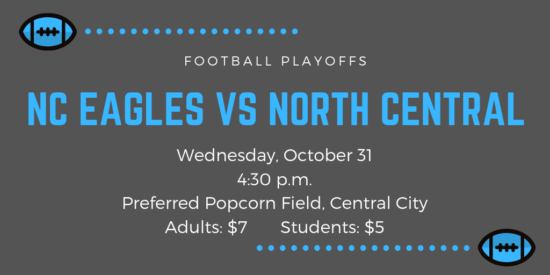