The Grand Return of The Festival of Lessons & Carols

“I’ll happily give the performance six, seven,… ten out of five stars!” “Amazing.” “Like nothing I had ever expected or experienced before.” “This concert continues to be my favorite way to bring in the Christmas season.” These are just a small fraction of the comments that were expressed by nearly every attendee, performer, and student after the conclusion of the 2022 Festival of Lessons & Carols on Friday, December 9.

This performance marked the fifteenth Season for the Festival which has taken place at Nebraska Christian Schools since 2008. The event included nearly one hundred thirty choir members. The choir consisted of high school students from three area schools, plus adults and children, who accompanied a nearly thirty-piece orchestra. The children’s choir was led by NC’s skilled music and band instructor Mike Flynn. The orchestra, vocal ensembles, and choir were led by the incredibly gifted Maestro Eric Dale Knapp from New York, NY. Maestro Knapp has conducted the Festival for all fifteen performances.

“The Festival transports you from a gym with decoration to an atmosphere of worship, with a dedication to excellence and a presentation of the Christmas story and more. Having a live orchestra from different towns in the Midwest; organ; children’s choir; high school choir; and involving members of the community makes it truly a wonderful event to attend or be a part of!” -Katherine Welk (singer and musician at the Festival)

The Festival of Lessons & Carols actually has a great amount of historical significance. The Service of Nine Lessons & Carols was first held on Christmas Eve in 1918 at King’s College, Cambridge, England. In 1919, a revision of the Order of Service was made involving rearrangement of the lessons where the hymn “Once in Royal David’s City” led the service. In 1928, the service was first broadcast, and with the exception of 1930, the service has been broadcast every year since, including the years during the Second World War. In the early 1930s, the BBC began broadcasting the service on overseas programs. Since 1963, a shorter service has been filmed periodically for television. “Wherever the service is heard and however it is adapted, whether the music is provided by choir or congregation, the pattern and strength of the service derive from the lessons and not the music.” – Dean Milner-White, Dean of York.

Katherine Welk, mezzo-soprano and percussionist for the event, was very happy to be a part of this time-honored tradition. She, like Maestro Knapp, has also been a part of the Festival of Lessons & Carols since the beginning. As an NC graduate (class of ‘13), Katherine has had the unique opportunity to be a part of this program as both a student and a professional.

“It is definitely my favorite Christmas event”, says Welk. In her first Festival performance, she had the opportunity to be the second soloist of “Once in Royal David’s City,” and this was the first year that she was a member of the NC Honor Choir. Katherine stated, “I loved music and singing. The opportunity to learn from both Mr. Flynn and Maestro Knapp was an important part of my choosing a music career.” She went on to say, “The Festival gave me many great opportunities from being a choir member, section leader, orchestra member, soloist, and rehearsal accompanist to helping behind the scenes with things in high school. I have learned a lot and loved all of it. I am always happy to be back each year!”

“I am rejoicing in God’s goodness in allowing the tremendous support in our faculty and staff in bringing forth a God-glorifying celebration of the birth of our Savior this Christmas season,” stated Jody Heuermann, NCS Foundation Director. “We rejoice that so many hearts were touched by this Christmas celebration. It was a fulfilling fifteenth season of our Festival of Lessons & Carols.”

On behalf of the entire Festival Committee, thank you all for your commitment in helping to make the 15th Season of The Festival of Lessons & Carols one of the best Festival performances in NC history. All of the help and support from each and every one of you has not gone unnoticed. Thank you all, and we pray you had a magnificent Christmas season.

Mark your calendars. The sixteenth Season of The Festival of Lessons & Carols is set to take place on Friday, December 8, 2023. 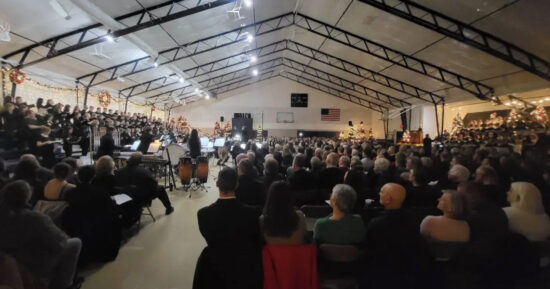